Where to surf in Cornwall?

The UK may be renowned for grey skies and cups of tea, but at the most south westerly tip of the island there are paradisiacal gems waiting to be discovered. When the sun shines, Cornwall is unlike any other surfing destination – boasting craggy cliffs, turquoise slabs and playful beach breaks, many of which are still relatively uncrowded, especially outside of the school holidays. From north to south, we’ve collated a few of our favourites for you to go explore and enjoy. (No secret spots though, of course!)

In north Cornwall, between Bude and Polzeath, there are a number of beach breaks including Summerleaze in Bude, Widemouth, Sandymouth, Northcott and Polzeath Beach itself. All of these beaches are mostly sand, become crowded in the summer and are within walking distance of a pub! If you’re staying in Bude with no transport then it’s easy to surf the town beaches, and all of these breaks work best on low to mid tides, as well as Widemouth and Polzeath being surf-able all the way through to high. There are also a number of surf schools at each location, and plenty of campsites and places to park too.

As you head down the coast you’ll come to Harlyn Bay, popular with beginners as the waves are often small and mellow. However, on big stormy days this is also the go-to break as it is sheltered and north facing. The beach break is relatively un-rippy, can be surfed on all tides and gets very crowded in the summer and during storms. There’s a huge carpark and a bus stop beside the beach too. Around the headland you’ll find Constantine Bay, best surfed on a high tide. This wave is a favourite amongst tourists and locals alike, and can barrel in the right conditions. Watch out for the strong rips and undercurrents, and if you’re learning make sure you always surf between the lifeguards’ flags. Further down the coast towards Newquay you will come across Mawgan Porth, which is a low to mid-tide spot and can also be exceptionally rippy and dangerous, especially when it’s big. If you’re unsure of where to jump in it’s best to ask the local RNLI. One more stop around the headland will take you to stunning Watergate Bay, busy in the summer but well worth the crowds, you can surf this beach through all tides and the 3 miles of sands make for plenty of peaks. Each of these beaches have nearby campsites, pubs and surf schools and are beautiful places to spend the day.

Go surfing in Perranporth to Portreath

Further down the coast you’ll come across one of the longest, if not the longest, beach in Cornwall, Perranporth. The town is packed with shops and restaurants, many of which spill right down onto the sands, and there are surf schools and shops galore. The beach is best surfed from low – mid, and the north end of the beach gets cut off at high tide, so make sure you don’t get stuck over there! Heading south there is Porthtowan, which pumps in the right conditions and handles big swells unlike a lot of Cornish beaches, but the rips can be dangerous and on big days the waves are best suited to only the experienced and local surfers. Occasionally overlooked, Portreath offers good shelter from strong SW winds and is popular with body boarders and surfers on stormy days.

The stretch of beach leading up to St. Ives works on low – mid, occasionally at high, and is super popular. Godrevy, right in front of the famous lighthouse, can produce world class, wall-y waves that are steep, fast and sometimes hollow, whereas heading further south the beach becomes Gwithian which is more mellow and manageable, a favourite amongst long boarders and single fins. The further south you paddle, the smaller and more sheltered the waves become, each small section of beach with it’s own name, until you reach the Hayle river mouth.

When you get to St. Ives, you’ll feel like you’re exploring the real Cornwall. The cute, white washed houses that line the narrow, cobbled streets all have colourfully painted doors and window frames, and fishing boats bob in calm ocean. Here you can surf the harbour on stormy days, or Porthmeor when the conditions align.

Towards Cornwall’s famous landmark of Land’s End, you will hit surf town Sennen, with it’s tight-knit crew of locals, surf schools, fish and chips shops and pub. You can surf Sennen and Gwynver through the tides, and there’s loads of campsites nearby if you need somewhere to stay. Both beaches are offshore on an easterly wind.

When it’s onshore on the north coast, head to Praa Sands in the south, a beach which needs the opposite conditions to those of Bude, Polzeath and Newquay. Always bathed in a magically golden light, even during the winter season, Praa is a punchy beach break and can mellow out on smaller days for beginners. When the swell’s solid, it’s best to leave it to the experts as many boards and bones have been broken on the shallow sand here!

Missions further south are best during the low season when the swells will wrap around and you can find spots sheltered from the prevailing, strong winds. Many of these are secret, and the only way to discover them is to ask the locals, do your research or get out a good old fashioned map. We hope this overview has provided you with some inspiration to see what Cornwall has to offer, and that you’ll discover a few spots of your own. Happy wave hunting!

Our surf trip from Denmark to Portugal 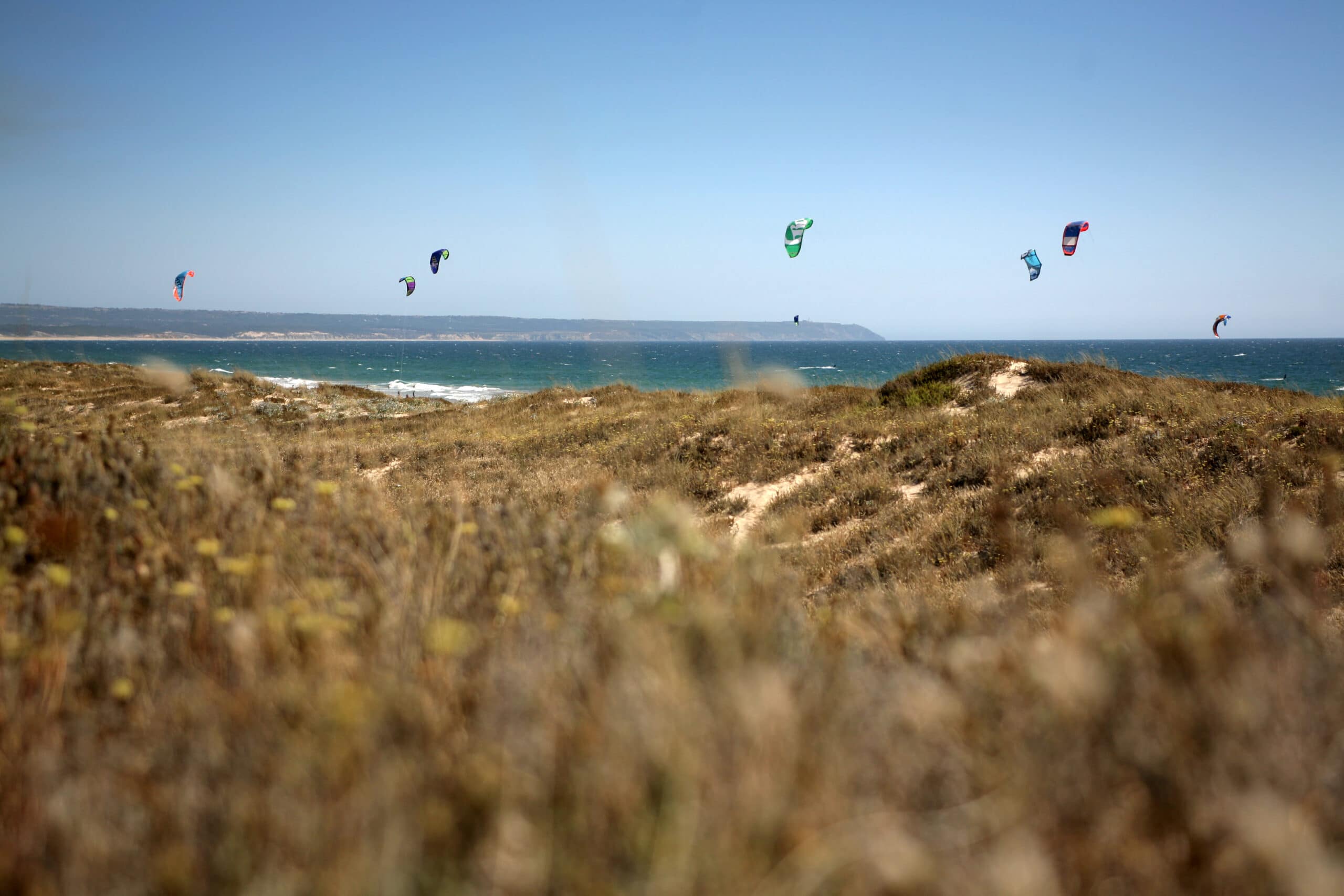 Where to kitesurf in Portugal?

Your cart is currently empty.